You are not connected. Please login or register
Go to page :

Thanks, lots of people tell me that. What are your critisisms?
Ghost

Hippie wrote:Thanks, lots of people tell me that. What are your critisisms? 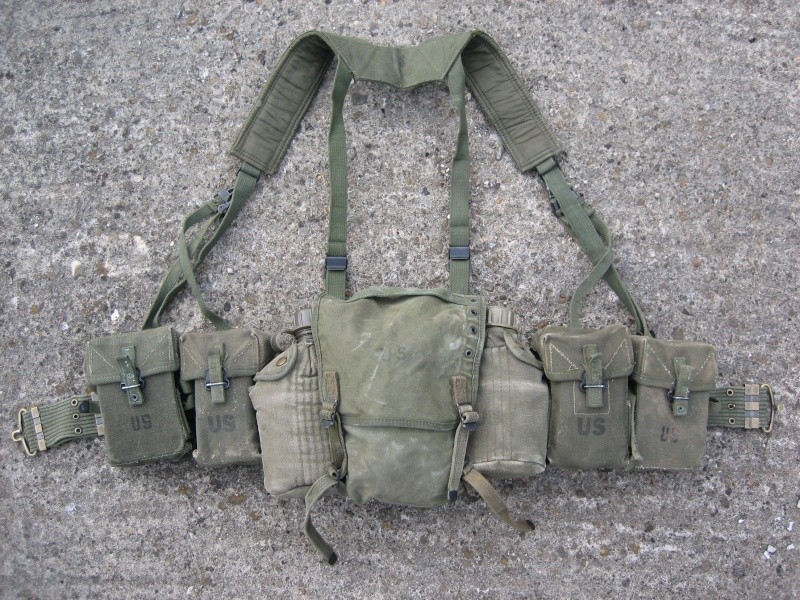 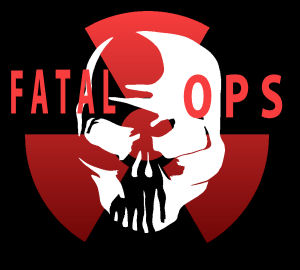 Well, the unit I portray, during the timeframe I portray rarely, if ever wore web gear while on patrol in the bush. The web gear was issued, but during the time I portray, it was left at the FSB or Division Base for when you got back, in case A) your base got shelled and you needed go put your stuff and go fight or B) you got your wake up call and you had to hand in your stuff and go home. You had to hand in all of the gear, and leaving it behind guaranteed that it would survive the length of your tour, and you wouldn't have to pay for it.

Criticism? Hang a toothbrush and a pack of cigarettes on your helmet, get some dirt and wear on the uniform, and get some tattoos.

On the serious side, yes the uniform does look too baggy, Idk I wear my ACUs fit to my body and just right on the length and it does look more professional and clean. I noticed the two toned color uniform. Your blouse is faded and your pants look new. It should be the other way around or both worn out. Other than that the 'Nam loadout looks great.
_________________

I actually plan on wearing my gear when I go 4-wheeling this Sunday, so I should get nice and muddy, and get some pictures that aren't in my backyard. But as for the uniform, everything is baggy - and I'm wearing my size too: Medium Regular. The tropical combat uniform was designed to be baggy to improve air circulation. Keep in mind that it was designed for overseas issue only, so they weren't going for formality (despite the fact that it is based off the M42 Paratrooper jump suit, which is crazy sexy). But getting your proper size when receiving clean laundry in the field, which happened every nine days, was determined by how fast you got to the laundry bag and grabbed three uniforms. Many times, soldiers wore overly large or overly small uniforms. Also, uniform rotation was never the same, so you were probably never going to see the same uniform twice.

As for the fading, it can't really be helped. I have no control over the color of 50 year old uniforms. But the dyes the manufacturers used were all over the place, and unlike today, can come in any shade of green under the sun. But the trousers are lighter than my jacket, but its more likely a dye problem. Like I said about the laundry issue - mismatched colors were a common sight.

A lot of people, particularly active duty guys, ask me about the gear - especially the ammo belt. All I can say is that the times have changed, and what's being done in Afghanistan is not what was done in Vietnam. Here's a good picture to prove my point: U.S. Army hair regulations, 1970 - the only thing I can't replicate. 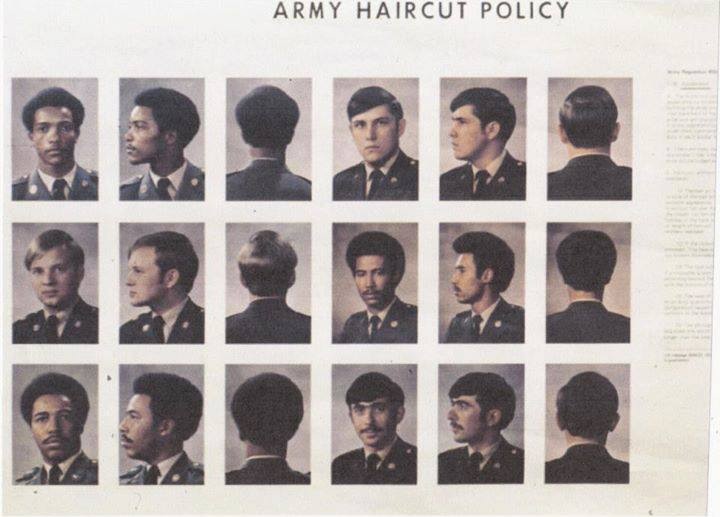 Well yes you are right back in the day, having your own uniform isn't all that easy and the sizing won't be as fit to the person I guess since I'd assume so that soldiers back in the day don't really go to clothing and sales. Also for my field pair uniforms, when I wash them I use hot water and no detergent so they're nice and stained for added camo (we still wear UCP and the brown stains from Korea almost makes it looking like desert MARPAT) And I don't use the dryer for my uniforms because ACUs do shrink.

REMFs (Rear Echelon Mother F'ers - is that term still in use?) back at Saigon and other major U.S. operation centers would take the tropical combat fatigues to a tailor and have them pulled in, for a more professional appearance, and some had the sleeves made into short sleeves, so they didn't have to roll their sleeves. Special Forces guys would also have their uniforms tailored, as to not snag on the brush. SOG guys would have the tropical fatigues modified, pockets on the arms, pulled in at the waist, camouflage patterns sprayed in with black spray paint, or completely dye them black like VC fighter "pajamas".

However, REMFs and Special Forces have time to do that sort of stuff. The average grunts tour was 62 days in the bush, 2 days local R&R, 61 days in the bush, week long pass to an R&R location (Korea, Hawaii, Japan), 61 days in the bush, 2 days local R&R, 61 days in the bush and a wake up. And when I say in the bush, I mean in the bush - not at an FSB, but in the jungle. AO sweeps could last longer than 60 days, and the only contact from the real world was the radio, and the resupply birds that came every three days with ammo, mail from home, and rations. Most never got the time to have their uniforms tailored, and even if they did, if they threw them in the LOG bird to get washed, they weren't coming back the next week, or ever. I know a Vet who once got a full set of Tigrerstripes in the laundry, but he sent them in the bird to get washed - they never came back and he regrets letting them go.

Sorry about posting such long replies guys, I'm just passionate about this, as its pretty much my only hobby - seriously, just about everything I do and buy relates back to Vietnam reenacting. Also, I'm enjoying this chance to teach people.
Andy

That looks real nice. I'm diggin' the 'ol school. My observations are: your rifle should have the 3 prong flash hider instead of the bird cage. Also, research 550 cord for your laces. I changed to that after talking with some Vietnam Vet's. They used super long pieces of 550. Enough for extra laces for themselves or a buddy. It also came in handy for tieing up somebody or securing gear.
Hippie

Oi vey - always with the three-prongs, eh - time for a history lesson.

When the M16 - both the Colt M601 and M602 - was issued to Airforce Airmen and U.S. Army Special Forces starting in 1960, it featured the infamous three-prong "duckbill" flash hider. In 1965 when the Army officially adopted an improved version, the Colt M603 - designate the XM16E1 - it retained the duckbill flash hider. However, by 1967, problems arose with the duckbill, and it was finally replaced on the improved Colt M603 M16A1. The problems being that the open ended flash hider will snag on just about everything in its path, which is a problem in jungle warfare. Also, troops were abusing the duckbill - using it to open cans. Oh, and it rings like a bell. When the rifles came through the armory, they were fitted with birdcages, and by the middle off 1968, all but a few remained in service - most in the hands of Marines. 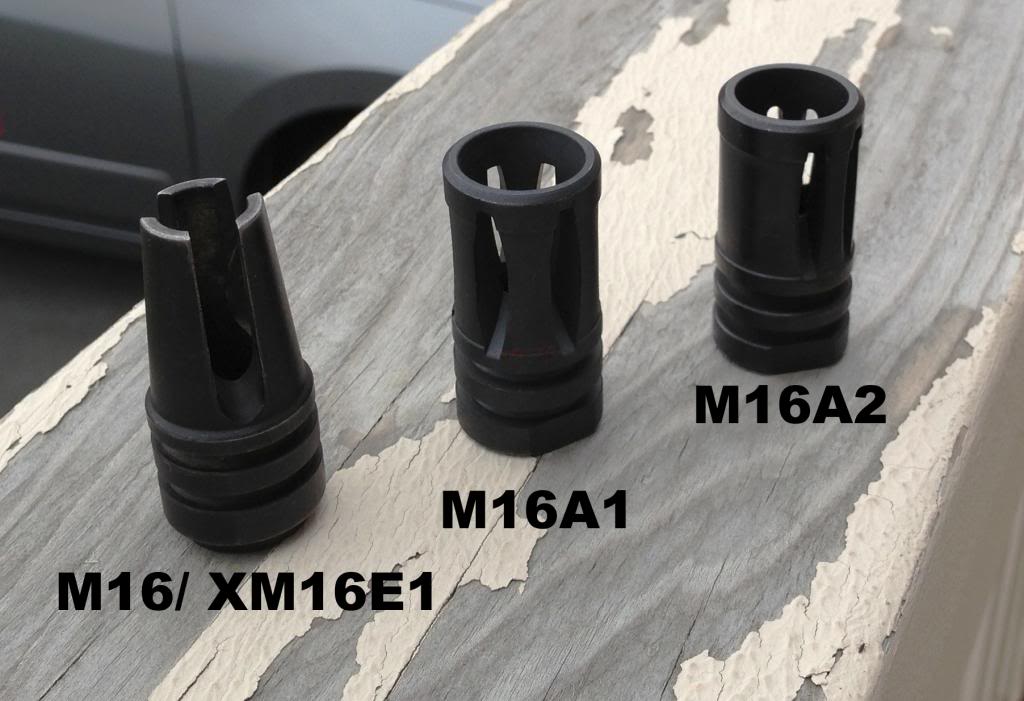 The reason the three prong became so infamous is because in the 1980's, when most of the Vietnam war movies were made, movie companies would use Colt SP1s as stand-ins for XM16E1s and M16A1s. The Colt SP1 being the police and civilian M16, it did not feature the improved birdcage flash hider.

As for the boot laces, I've seen that done but I have two things stopping me from doing that myself - the first being that I haven't seen it done by the C 1/8 in all of the pictures I have of them during this period. The more popular item, at least from late 1970 through 1971, was lace-in boot zippers. But the second reason is just plain odd - I can't find OD green 550 chord anywhere - just this fancy multi-color stuff, or tan and black. You'd think that stores around a large joint base would have it, but not even the surplus store has it. It's crazy.

Also, if anyone was wondering, my rucksack isn't a medium ALICE ruck - it's a Rucksack, Tropical; the largest rucksack of the war. My FSL said he'd never wear it, and I can't blame him. My ruck is only 60lbs, about half of what it will be when I'm done, and the fact that my ruck lacks a load bearing frame causes a whole lotta hurt. 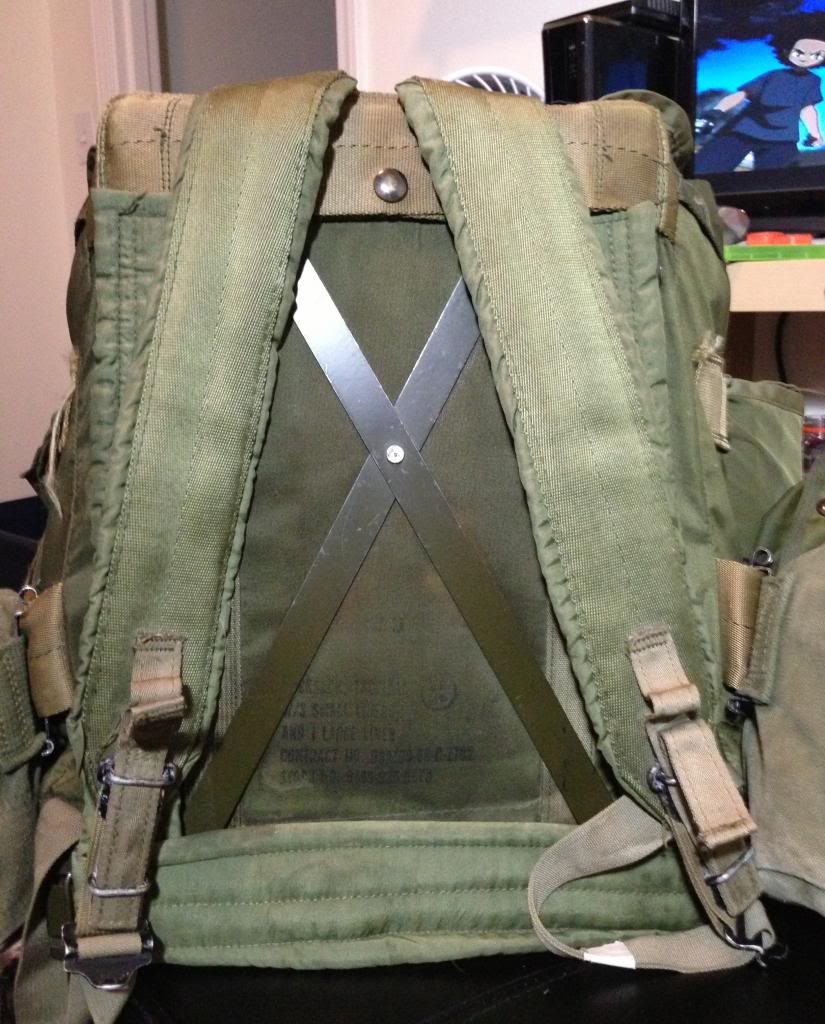 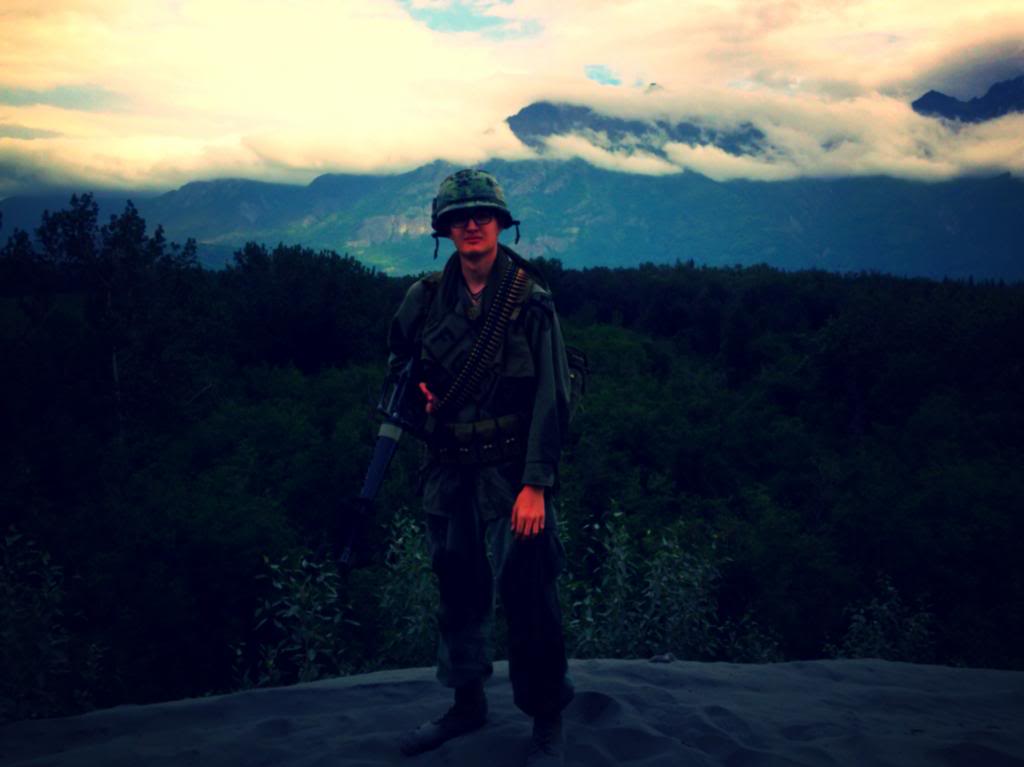 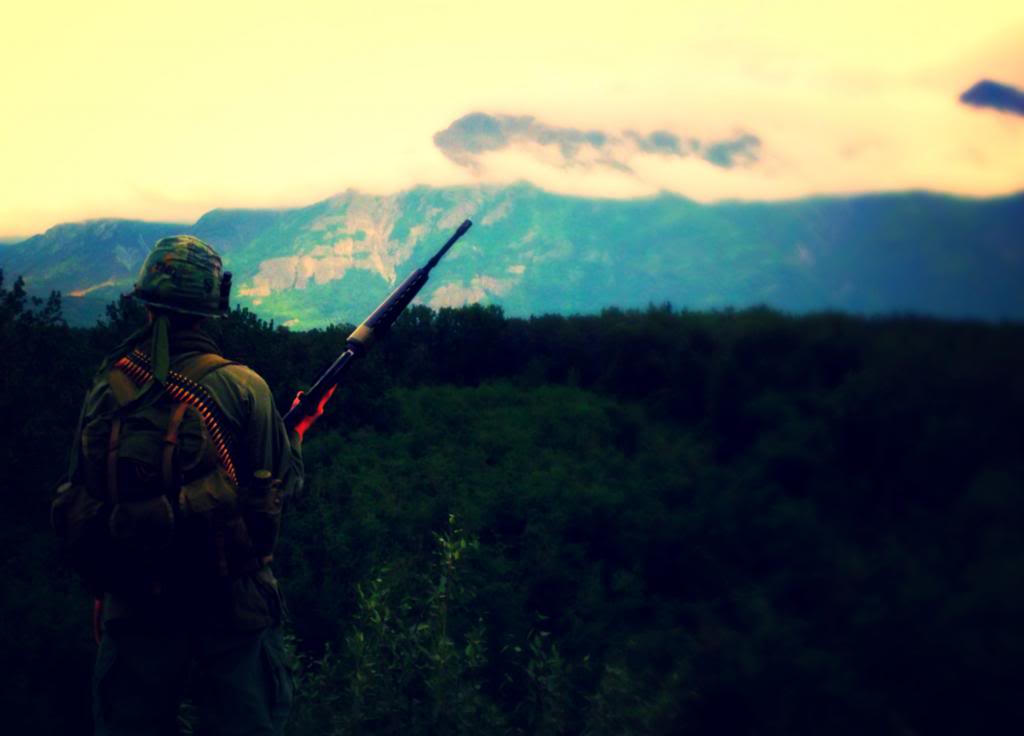 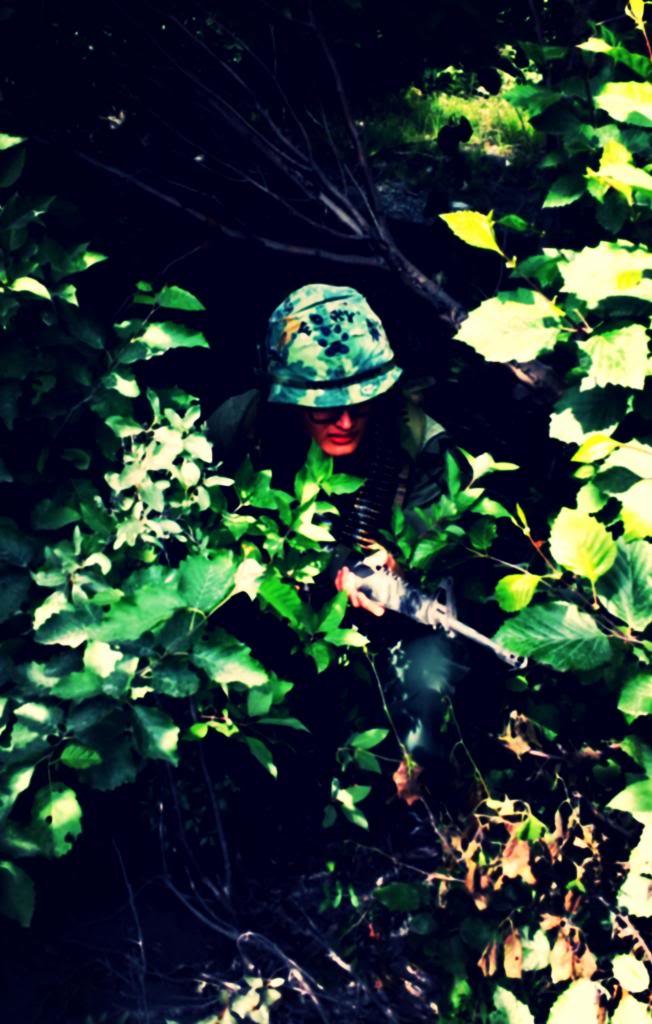 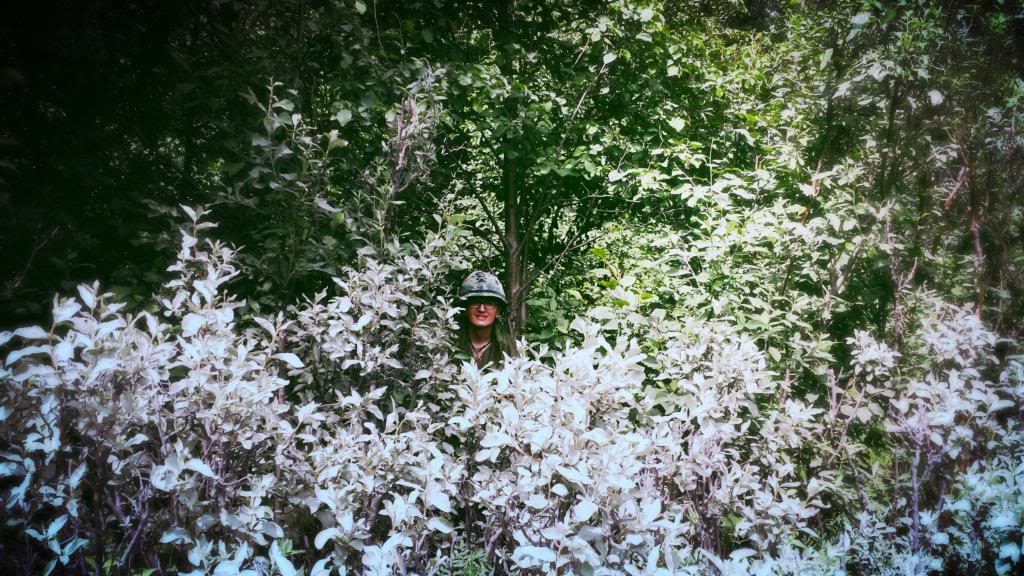 That's it guys - I promise.
Andy

OK. Now I know about the time-frame for the different flash hiders. I knew why it was changed, now I know when. Good info. It is strange that you can't get OD green 550 cord. Where are you? I'm pretty sure I have seen it here at a few places.

I would not have thought zip up boots popular among Infantry types. Mud and zippers.....not a good combo. Maybe for the guys that didn't venture out?
Hippie

Anchorage, AK - near JBER. All they have is fancy chord, not just plain OD chord. It's really weird.

As for the boot zippers, they were actually an issued item, part of Operation Safe Step. But you're right, not all guys wore them, but they were great while they lasted, as they did rot away in the jungle. Guys would be too tired to unlace their boots, but the zippers were an attempt to get them to take their boots off and air their feet out, to prevent jungle rot. But they were really popular with pilots and aircrews, and REMFs. A few guys had sneakers sent from home to wear at night, and others wore sandals they bought in-country. I have Chucks in my rucksack.
savoy6

the paracord thing is because everyone and their little sister is making bracelets and crap.....so they keep "fashion colors" in stock....

savoy6 wrote:the paracord thing is because everyone and their little sister is making bracelets and crap.....so they keep "fashion colors" in stock.... 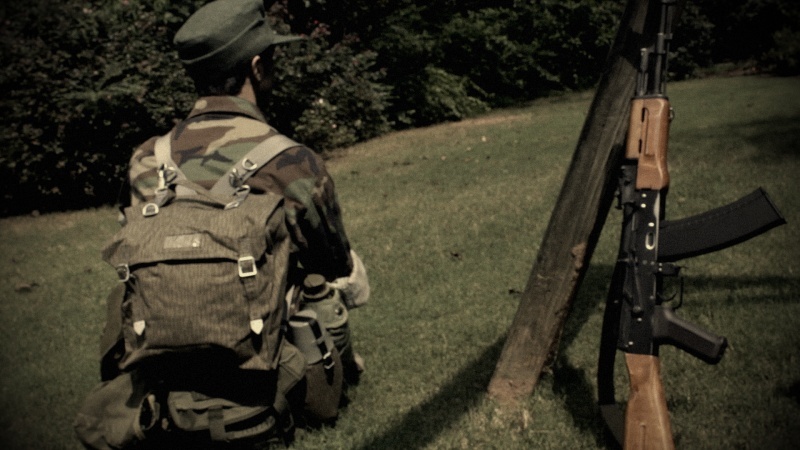 Well I took advantage of the snow. 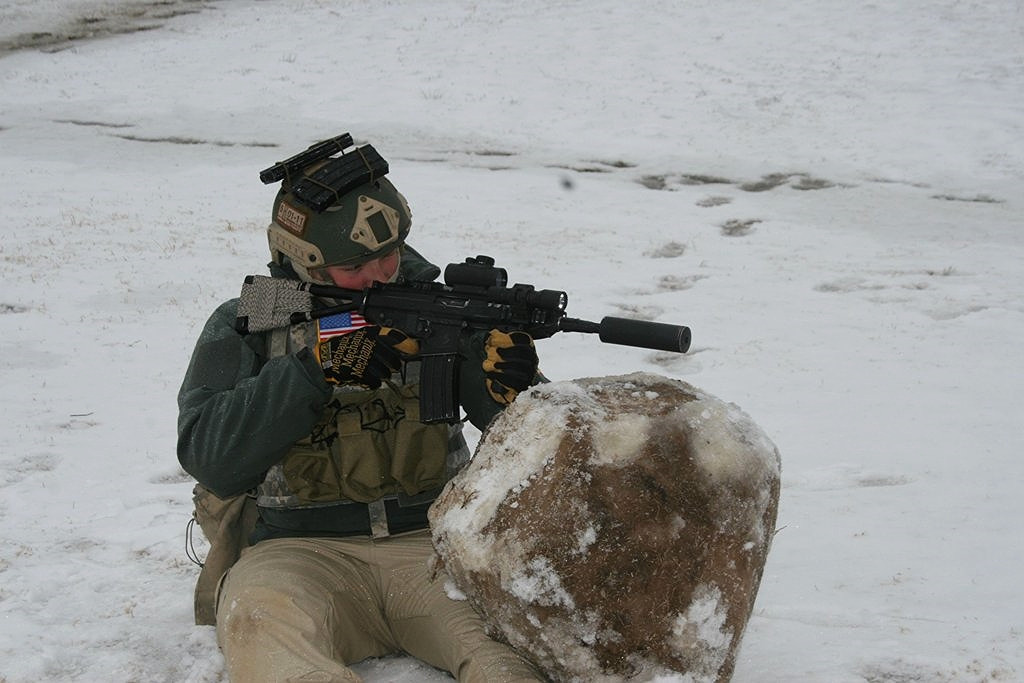 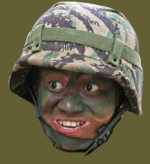 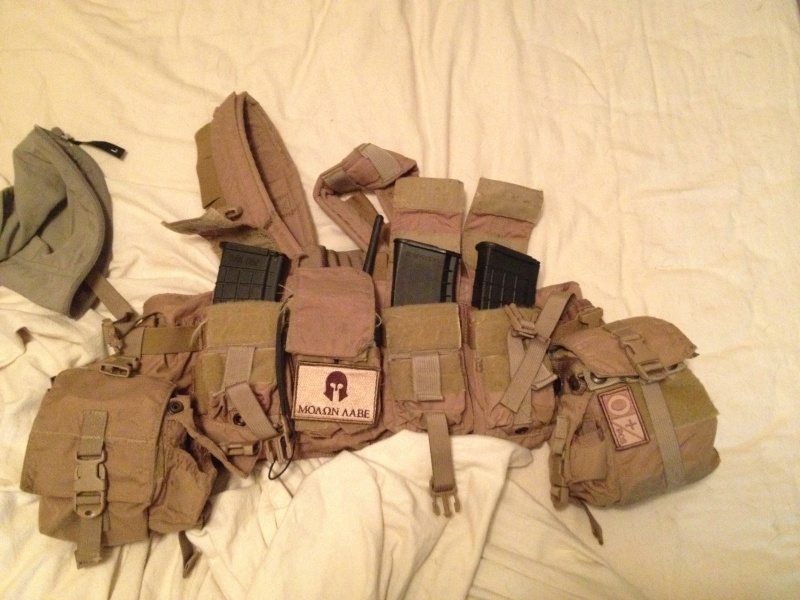