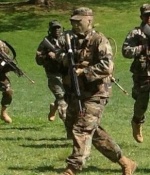 Recently I and a few members of Dagger Unit went to play airsoft at Elite Ops Airsoft field in Canton. It was overall a good experience.

Staff: The guy handling the register was friendly and professional. Didn't look down his nose at anyone and handled all of our transactions accordingly. The guy handling the chronograph was also very professional and overall a nice guy. The referees were GREAT. Hands down best referees I've played under. They were always helpful and vigilant on the field. They respected every player and handled any dispute with a professional attitude and were not afraid to answer any questions when you had them. They certainly did not favor any players and were very fair with the few calls they had to make. Don't expect to have a conversation with the owner, I asked him a question about how to get to the viewing room and he literally looked at me and looked away...rather strange...

Field: I actually enjoyed the field alot. It was rather large and could accomodate a 8v8 game comfortably, although I would put its max at 10v10 for any sort of maneuvering capability. I would not describe it as a MOUT environment. I would describe it rather as...a desolated urban wasteland. Think Stalingrad or Chechnya

; This made for some interesting gameplay and of course utilizing individual MOUT techniques aided you as an individual but the maze of lanes and open areas made utilizing MOUT formations inefficient; rather Dagger utilized techniques more suited to patrolling. There was a viewing area you could watch the game from that was very convenient although you could only see half of the field. They also had a nice little shooting range to test your weapons with.

Gameplay: I had a very good time with the games, alot of fun. However, I will say I didn't like the actual gametypes they had. The field uses props very well and instruction and help from the refs (thanks refs) was excellent. I just didn't like the gametypes, that didn't stop me from having a very good time playing against the other players though. They had a big intercom system that announced the status of the teams so that was very helpful and cool. There was an even mix that day of older players and younger players, although I would have to say that the field really did lean towards the younger guys on that day. Didn't have any issues on my side with hitcalling or rules being broken or anything, pretty much a drama free experience which was extremely gratifying. The refs did do a chronograph test of Dagger Unit in the field because of a complaint from the other team that our guns were hot...of course we passed with not a single gun shooting over 350fps. The ref that conducted the requested test was very professional about it so I appreciated that. It is good to see that the refs will respond to a players complaint, so honestly, that was a positive experience for me even though the accusation was aimed at my team. The only negative really was the downtime between games was very small. Had to rush to get everything ready for the next game everytime, made it in with only 10 seconds before the door closed most of the time. Was nerve racking haha

Sustaining Points
+Refs (can't state enough how good the refs were, was such a relief to have great refs after seeing the absolute trash that ref at other fields)
+Viewing Room
+Shooting Range

Would I recommend it?

Did you have fun babysitting the wee minions at Elite